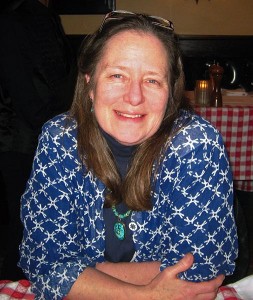 Launched from a great fine-arts college, Philadelphia College of Art, with a BFA in sculpture, I went to work in the world. I painted animation backgrounds and made props and models for TV ads in New York City. I then moved to Seattle, where I built prosthetic feet and medical models and made prototypes for toys. Next I began carving stone.

Stone will absorb all one can give it, all the intensity, all the emotion and give back beauty. Passion inflicted on a stone reverberates.

I have been carving stone for 15 years. I’m inspired by nature and driven by instinct. From some pieces I take molds and cast them in bronze, concrete, and clay. Some I raku-fire.

In stone I can find expression not available elsewhere. This is particularly true of the fossil corals and brachiopods. These ocean-carved shapes took 450 million years to evolve, moved by tectonic plates and forged under the hammer of nature.

They’re magic lies just beneath the surface. I may live with a stone for many seasons before I see what it wants to be. Then it is like cloud watching, and the stone floats into being on a wave of water, diamonds and grit. The ultimate shape literally moves around inside the stone until it comes into focus.

One of my missions is to find the images I know are in the stone and bring them into being. I want to make them look as though they are just about to move at the slowest, almost imperceptible pace of life. They connect me to my earth and my soul and to the unending layers of life.

“You can see with the eyes of a rock. You first see a cold mist or fog. Then you capture a glimpse. You have to see that glimpse, stop it and then you can see what the rock sees. The eyes of a rock can skip out anywhere. They provide the gateway to the sacred maize. Rocks can show you what they will become…”
(Agnes Whistling Elk)

When I began to draw I was amazed to discover that pure intention focused on an idea, could bring a drawing or painting to life. To bring the present moment to the edge of movement falling into the next step, like tacit walking, gravity balancing presence. As a teenager, I was working on a drawing late one evening. I was so drawn into the creative process that I actually experienced a vision of physical movement by one of the figures in the drawing. She reached for me. Frightened, I pulled back. Stillness regained control, but I knew I’d experienced something different and altered, but very special. The experience had a very seductive, other dimensional quality to it and shook me to the core and had a profound and religious affect on me. It influences me to this day. I feel that I always try to reach that state of consciousness, deep within my creative process. Where there is a suspension of time that reflects the real time beyond the borders of the here and now, to what will be. There is a magic there that I long for. I try to create the fluidity of a suspended movement. When you hold your breath to suspend a moment on an edge. A frozen movement about to be released. If you can lead the mind to complete that motion you’ve succeeded in bringing that image to life. You also have to make sure that there is nothing in the way of that directive, no visual distractions. I always try to push to edge of the light. I clearly feel that I am in place of heightened awareness when I am working.

Robert Long reintroduced me to watercolor, in 1999. I learned about leaving the white of the paper to represent the brightest white light of your image. It always seemed to remind me of the old Quaker adage, “…in remembrance of the light….” That idea connects my Quaker heritage and their search for the light within to my search for the creative light. Leaving the light on creates dimension and depth and a unique reality.

When I carved stone it taught me look harder and see more. Polishing out the finest almost imperceptible scratches. I think that intense process has helped me to see my paintings and drawings more clearly. The paintings became a release for me from the intensity of the stone carving and balances me.

New! Art Kits
Includes a zoom meeting
to put it together!